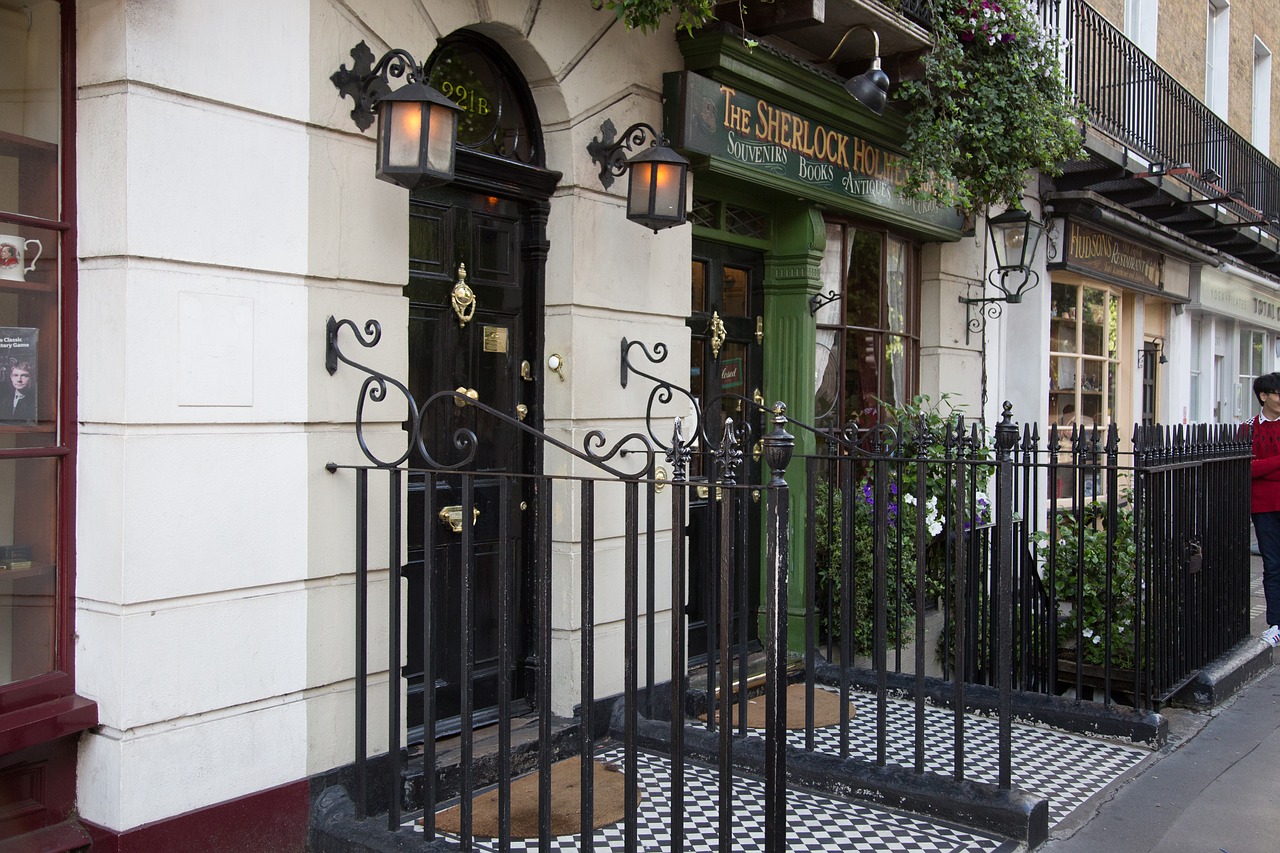 Museums
masquer
1 How to get there, opening hours, ticket prices
1.1 Entrées similaires:

Everybody knows this character through books, then films, comics and references in popular culture. Perhaps the only museum in the world is dedicated to him in London (there is another one in Switzerland), which stores things that never belonged to a person. Even the address of the museum is fictitious, although mail is constantly arriving there for the fictitious character.

This literary character is the London-based detective Sherlock Holmes, who is known to have lived at 221b Baker Street. This address now houses the Sherlock Holmes Museum, dedicated to his famous detective, created by the talent of Arthur Conan Doyle. The history of the Sherlock Holmes Museum is quite interesting. Nevertheless, mail addressed to the famous detective was constantly sent to this London address. Later, Baker Street was extended and 221b was among the numbers assigned to the buildings by the National Abbey.

In fact, the Sherlock Holmes Museum itself is located in house number 239, but when it was established, it was specially registered as a legal entity “221b Baker Street”, after which a plaque with the required number was officially hung on the house-museum. From then on, all correspondence destined for Sherlock Holmes went to the correct address.

The museum building itself is a Victorian building dating from 1815. In this building, in Holmes’ time, furnished rooms were actually rented. The four floors of the Museum House are dedicated to the great detective. Holmes meets his admirers at the entrance. There is a commemorative plaque attached here, which in Britain is installed on buildings where famous people once lived. The inscription on it indicates that the British police detective-consultant Sherlock Holmes lived in this building.

The interior is meticulously crafted and corresponds perfectly to the descriptions in the book. The ground floor of the house is occupied by a small entrance hall and a souvenir shop in the style of the 19th century. The second is provided by the living room, which simultaneously served Holmes and the dining room, as well as the private room of the detective. Holmes often used the living room as an office and received his clients there. All the furniture in this room conforms perfectly to the descriptions in the book: there is a fireplace, a dining table, a couch where you can sit and relax, and even the famous monogram of Queen Victoria, which Holmes, according to one of the stories, shot with his own hand with a revolver.

The third floor is occupied by the rooms of the owner of the house, Mrs. Hudson and Holmes’ constant companion, Dr. Watson. The fourth floor, originally intended for a cupboard and the needs of the house, is now lined with wax figures of other heroes from Conan Doyle’s stories about Sherlock Holmes.

How to get there, opening hours, ticket prices

The museum is located near the Baker Street subway station, decorated with profile portraits of the famous detective. You can also take a taxi or bus.

The museum is open every day from 9:30 am to 6 pm. The exception is the Christmas holidays, which are days off. The cost of the visit is indicated on a bronze plaque attached to the entrance doors of the museum. It is £15 for adults and £10 for children.