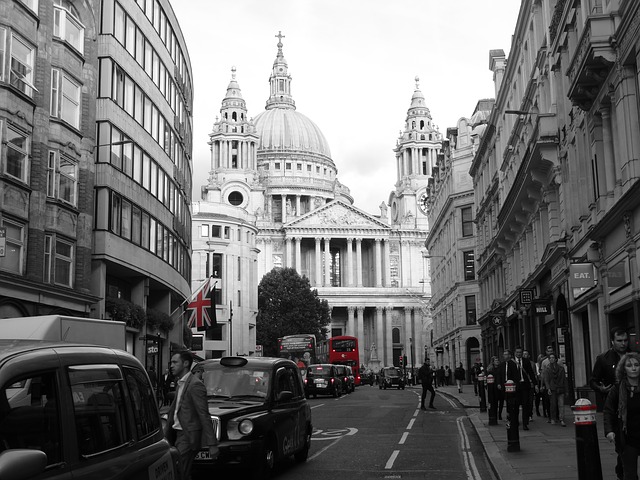 Monuments
masquer
1 History of St Paul’s Cathedral
1.1 The Dome
1.2 Video
2 How to get to the Cathedral
2.1 Entrées similaires:

One of the main attractions in London is St. Paul’s Cathedral, built in honor of the apostle Paul. You can see it from almost every part of the city. Today it is the seat of the Bishop of London. The cathedral is more than three centuries old.

The appearance of the cathedral is striking for its thoughtfulness of proportion and a harmonious combination of details. The interior decoration is cool and simple. It has been made in accordance with the canons of the Protestant Church: here you will not see beautiful stucco mouldings with gilding. Magnificent stone carvings, beautiful stained glass windows and wooden benches have become a true decoration of the cathedral.

The dome of St. Paul’s Cathedral is the third largest in the world and is one of the most characteristic elements of London’s skyline. The present building, designed by Sir Christopher Wren, was completed in 1710 on the site of the original cathedral, which was destroyed by the Great Fire of London in 1666.

Inside the dome, the Whispering Gallery, named for its incredible acoustics, offers a close-up of the frescoes of St. Paul’s life that decorate the interior of the dome. From here, visitors can climb higher to two other galleries, which are located outside and offer magnificent views of all of London. Guided tours are available by prior arrangement.

Time has spared the Cathedral, even past wars have left it untouched. And after a large-scale reconstruction in the early 2000s, St Paul’s Cathedral is once again shining in all its splendour.

A week before Christmas, magnificent services begin in the cathedral with hymns. The impressions of the visit at this time will be the strongest. Londoners come here with their families, carrying on a centuries-old tradition.

The Roman church of Diana may once have stood on the site, but the first Christian cathedral was dedicated to St Paul in the proclamation of 604. This cathedral burned down and the site (built 675-685) was destroyed by Viking raids in 962. A third cathedral, built on the site, burned down in 1087.

The fourth cathedral, now known as St Paul’s, was built of Caen stone in the late 11th century. At the time, it was one of the most massive buildings in the British Isles, and its tower was higher than the dome of the present cathedral. During the English Reformation (16th century), the building fell into disrepair and its nave was used as a market. The tower was destroyed by lightning (and the resulting fire) in 1561 and was never replaced. Major repairs were undertaken in the 1630s by Inigo Jones, who oversaw the removal of the shops, the restoration of the walls and the construction of an admired portico on the west side. However, during the English Civil Wars (1642-51) the structure was severely damaged by Cromwell’s cavalry troops, who used it as barracks. In the 1660s, Christopher Wren was hired to survey and repair the cathedral, but it was destroyed in the Great Fire of London (1666) before work could begin.

Wren then designed and supervised the construction of the present cathedral, which was built mainly of Portland stone. His plans were approved in 1675 and work continued until 1710. During the 19th century, some decorative changes were made to the interior of the cathedral to bring it into line with Victorian taste. In 1941, during the Battle of Britain, a civil defence brigade protected the structure from fire, although it was directly hit by bombs; at one point an unexploded bomb was removed from the nave at great risk to its life. Repairs were carried out after the war.

The famous dome of St Paul’s, which has long dominated the London skyline, consists of three shells: an outer dome, a hidden brick cone for structural support and an inner dome. The cross atop the outer dome rises 112 metres above the ground (109 metres above the main level of the cathedral). Beneath the cross is an 850-ton lamp post and the lead-covered outer dome, both supported by a brick cone. At the base of the lantern (the top of the outer dome) is the famous Golden Gallery, which offers a panoramic view of London, some 530 steps (and about 85 metres) from the ground. Further down, a point below the brick cone, the Stone Gallery, is another popular viewpoint. From inside the cathedral you can see the inner dome, a masonry structure 101 metres (31 feet) in diameter. The frescoes and grisaille of the inner dome can be seen in the whispering gallery (so called because whispers on one side of the gallery can be heard on the other), 30 metres above the cathedral floor. Buttresses and columns support the weight and thrust of the upper part of the dome; below, near the height of the Whispering Gallery, is a circle of 32 buttresses, which is not visible from the ground. 8 massive pillars connect the dome buttresses to the cathedral floor.

To the north and south of the dome section are wide transepts, each with a semicircular portico; the choir and the chapel of Jesus are to the east, while the nave and the ‘front’ entrance are to the west. Framing the western façade, the twin bell towers rise almost 65 metres above the ground. The southwest tower is known for its geometric staircase (with its Tijou balustrade) which leads to the cathedral’s library and archives. From the nave, the chapel of the Order of St. Michael and St. George can be accessed from the southwest tower, while the chapel of St. Dunstan can be accessed from the northwest tower. The cathedral has about 300 monuments. The American Memorial Chapel (formerly Jesus Chapel), dedicated in 1958 to American soldiers killed in World War II, is located in the apse to the east of the Chancellor’s Chapel. From the west façade to the east end of the apse of St. Paul’s Church, the total length of the structure, including the western stairs, is 170 metres.

How to get to the Cathedral

During an excursion to St. Paul’s Cathedral, you must not use video and photographic equipment with you, shooting here is not allowed.

The cathedral is closed to the general public during festive events. Free admission is only available during Sunday services. From Monday to Saturday, it welcomes you from 8:30 am to 5:00 pm. But be on time before 4:00 pm, as the ticket offices close at that time.