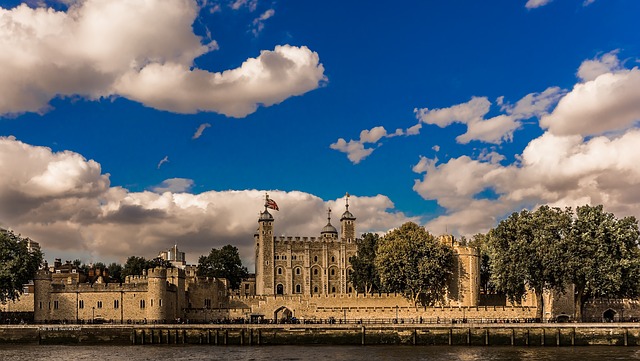 Her Majesty’s Tower of London is situated in East London on the boundaries of the boroughs of Stepney and the City of London. Directly south, spanning the River Thames, lies the famous Tower Bridge. To the east of the Tower are the St Katherine’s Docks. The Tower of London dominates the river approaches to the City of London, and can be reached by Underground Tower Hill Circle and District lines, or by buses 42 and 78.

Tower Bridge is a source of never-ending fascination to visitors. Many who come to the Tower of London often wait a long time to see the roadway raised to allow an ocean-going ship to enter the Pool of London. Although the two bascules which carry the roadway each weigh over 1,000 tons, they can be raised in under two minutes. The Bridge was built between 1886 and 1894 by the City of London Corporation to link the southeastern suburbs with the city and eastern London. It cost over a million pounds.

History of the Tower of London

Its buildings and grounds have historically served as a royal palace, political prison, place of execution, arsenal, royal mint, asylum and public registry. The oldest part of the fortress, the White Tower (centre right), was built in the 11th century and then rose to the top of four domes; the Traitors’ Gate (centre left) dates from the 13th century.

Immediately after his coronation (Christmas 1066), William the Conqueror I began to erect fortifications on the site to dominate the indigenous mercantile community and control access to London’s Upper Basin, the main port area, before the docks were built further out from the water in the 19th century. The central garrison – the White Tower – was established around 1078, within the old Roman city walls, and was built of limestone from Caen in Normandy. During the 12th and 13th centuries, the fortifications were extended beyond the city walls, with the White Tower becoming the nucleus of a series of concentric defences comprising an inner and outer quarter.

The inner wall of 13 towers surrounds the White Tower, the most famous of which are the Bloody Tower, Beauchamp Tower and Wakefield Tower. The outer wall is surrounded by the moat, which was originally fed by the Thames, but has been drained since 1843. The wall outside the moat contains cannons; next to them, modern artillery pieces are fired on state occasions. The whole complex covers 18 hectares (7 acres). The only entrance to the grounds is at the south-west corner from the town. When the river was still one of London’s main thoroughfares, the 13th century water gate was much used. Known as the ‘Traitors’ Gate’, it was named after the prisoners who passed through it on their way to the Tower, long used as a state prison. The armouries that now occupy the White Tower, together with another brick building dating from the 17th century, house weapons and armour from the early medieval and modern periods. Much of this collection, known as the Royal Armouries, was transferred to a new museum in Leeds in 1996.

The tower was a royal residence until the 17th century, and was home to the Royal Menagerie (the Lion’s Tower) from the 13th century until 1834. Richard II’s adviser and tutor, the statesman Edmund Dudley (1510), the humanist Sir Thomas More (1535), Henry VIII’s second wife Anne Boleyn (1536), Lady Jane Gray and her husband, Lord Guildford Dudley (1554), and the 11th Lord Lovat, Simon Fraser (1747), a Scottish Jacobite leader. During the First World War, several spies were shot dead here. Other notable inmates include Princess Elizabeth (later Elizabeth I), briefly imprisoned by Mary I on suspicion of conspiracy, the soldier and conspirator Guy Fawkes, the adventurer Sir Walter Raleigh and Sir Roger Casementet, arrested for treason during the First World War. In 1483, the teenage King Edward V and his brother were last seen in the tower before they disappeared and were probably murdered.

Until 1994, the British Crown Jewels and regalia were kept in the underground Jewel House; they are now kept in a more spacious facility above ground. In the 1990s, restoration work was carried out on various parts of the tower, including the medieval flats in Wakefield and St Thomas’ Towers.

A military garrison is maintained at the tower. There is a resident governor who occupies the 16th century Queen’s House on Tower Green. Still dressed in Tudor uniforms and living in the Tower, they are responsible for guiding the two to three million annual visitors to the Tower. The ravens with clipped wings are guarded by the master of the forest raven. A tradition dating back to the time of King Charles II (reign 1660-85) claims that if the ravens left the Tower, the fortress and the state would fall. The Tower is adjacent to Tower Bridge (1894), the only central bridge over the Thames under London Bridge.

Nearby is Tower Pier, embarkation point for the river launches which take tourists on short trips to places of interest. The river foreshore in front of the Tower of London, which is part of the Tower lands, is used as a pleasure beach by children. They have the late Lord Wakefield to thank for this open air delight. In 1934, when he was Sir Charles Wakefield, he obtained King George V’s sanction for the foreshore to be converted to a playground by spreading hundreds of tons of sand on the gravel beach. It was opened that year and has been popular ever since.

How to get to the Tower of London